This post initially featured on our dedicated analysis site for football around the globe, totalfootballanalysis.com

Arsenal fell to a disappointing 1-0 defeat to West Ham on Saturday. Unai Emery’s side put in arguably their poorest performance of the season as a solitary Declan Rice goal gave the Hammers all three points against their London rivals. Champions League-chasing Arsenal came into the game requiring a win to keep them within sight of Chelsea in fourth place. West Ham’s tactical setup and Arsenal’s lack of creativity meant that Arsenal fell to a fifth defeat in the Premier League.

This tactical analysis will show how Manuel Pellegrini’s side deservedly won as they executed their game plan to perfection. West Ham have improved steadily with every game under the Chilean and as much as Arsenal were poor, West Ham were organised, industrious and focused. The home side’s starting XI was a well balanced mix of flair and solidity. Despite experiencing only 41% of the possession, the Hammers had 11 shots of which three were on target compared to the visitors’ two.

Arsenal were set up in a 3-4-3 formation. Mesut Ozil missed yet another away game fueling speculation that his future under Emery is looking bleak. However, despite all these off-field issues, Arsenal dearly missed Ozil’s creativity in midfield. Arsenal enjoyed 59% of the possession but were still only able to register two shots on target.

With an xG of 0.69, Arsenal were genuinely devoid of any sort of creativity from midfield. This forced the forwards Alexandre Lacazette and Pierre-Emerick Aubameyang to drop deeper in an attempt to make things happen. The lack of an attacking midfielder meant that Granit Xhaka’s role in dictating the tempo from deeper in midfield was affected as well. The Swiss had to take up more advanced positions in midfield which, as a result, handicapped the transition from defence to midfield.

The introduction of Aaron Ramsey and Lucas Torreira after West Ham’s goal brought a significant impetus to Arsenal’s attack simply because both were able to operate as ball-carriers effectively. As Emery conceded later, Arsenal gave up too much room in midfield which cost them the game.

Sead Kolasinac has been an important attacking outlet this season. The Bosnian’s understanding with Alex Iwobi on the left flank allows him to bomb forward at will. Similarly, Hector Bellerin enjoys the same freedom on the right flank. Arsenal have been far too reliant on the overlapping capabilities of their wing-backs and when these channels were cut, they struggled to find any other solution.

Hector Bellerin’s absence was a significant issue as his replacement Ainsley Maitland-Niles could not offer the same penetration playing as a right-back or right wing-back. A lack of control in midfield resulted in Arsenal engaging in a lot of sideways passing between the defence simply because they could not find any other attacking options. 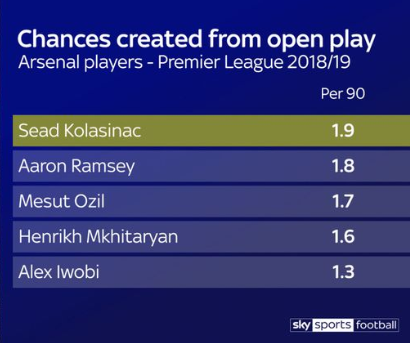 A prominent weakness in the overlapping style of play is how exposed Arsenal are on the counter. This is blatantly noticeable on the left flank. While Bellerin has the pace to recover, Kolasinac simply does not possess the pace or athleticism to compensate for his poor positioning. This was exploited by West Ham as Michail Antonio, Samir Nasri and Felipe Anderson positioned themselves in the space left behind by Kolasinac waiting for the long ball to be played forward.

As seen on numerous occasions, the opposition are quick to earmark this weakness in Arsenal’s defence as a a potential outlet.

Credit where it’s due, West Ham were excellent against their London rivals. From defence to attack, the Hammers executed Pellegrini’s tactical setup very well as they stifled Arsenal’s attack and looked far more threatening than the visitors. West Ham were very meticulous in their approach to the game. They allowed Arsenal majority of the possession but made sure that the opposition could not utilize this possession to fashion chances.

Key to this was the distance covered by West Ham’s attackers. Anderson, Nasri, Marko Arnautovic and Antonio were well drilled to cut the passing lanes and stagger Arsenal’s transition from attack to defence.

Space in midfield allowed Nasri and Anderson to utilize their flair and creativity as the home side threatened a very nervous Arsenal defence. While West Ham’s goal came from Xhaka’s defensive error following a set-piece, it was well-deserved and the home side rightly won the game.

Anderson’s importance to this West Ham side cannot be understated. The Brazilian is growing in confidence with every passing game and is quickly emerging as the talisman for his side. Against the Gunners, his exquisite dribbling, eye for a pass and constant running was fantastic to watch. 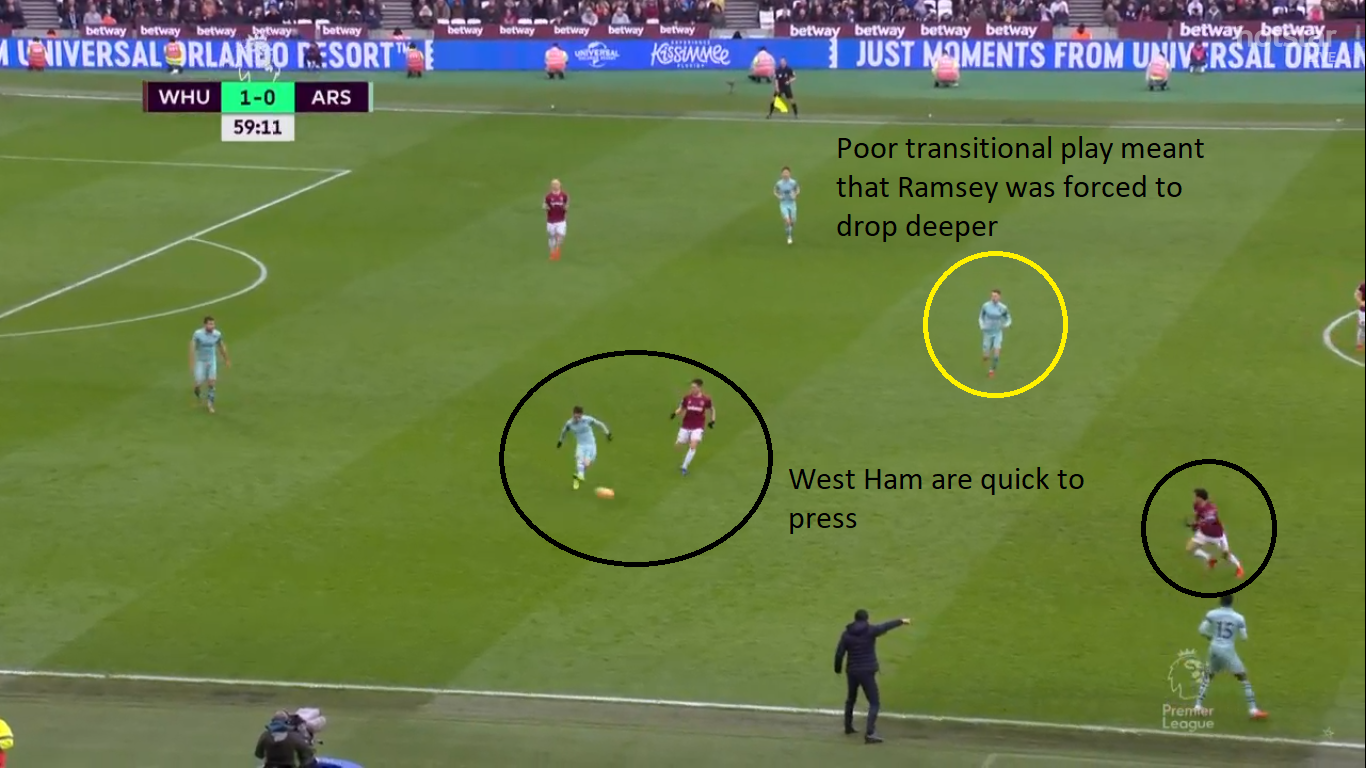 Six months into Emery’s reign, Arsenal still lack a clear identity in terms of their style of play and tactical setup. Initially, the Spaniard spoke about how he wants his side to press the opposition but at the halfway stage of this season, Arsenal aren’t anywhere close to a pressing side. Mesut Ozil’s constant omission for his apparent inability to press is also pretty unfair if Emery isn’t asking his side to press at all.

Undoubtedly Emery deserves the time and backing to implement his philosophy on this team. Up till now though, apart from in a few aspects, Arsenal look imbalanced and confusing as to what type of side they really are. It still remains early to judge but the honeymoon period for the Spaniard is definitely over.

Arsenal’s Champions League hopes took a huge blow as they fell to West Ham, a loss that leaves them six points behind Chelsea in fourth place. With no clear game plan, mediocre players and constant defensive errors, Emery’s side have a long way to go before they can even compete for a top four finish, let alone the Premier League title.

If you love tactical analysis, then you’ll love the digital magazines from totalfootballanalysis.com – a guaranteed 100+ pages of pure tactical analysis covering topics from the Premier League, Serie A, La Liga, Bundesliga and many, many more. Pre-order your copy of the January issue for just ₤4.99 here, or even better sign up for a ₤50 annual membership (12 monthly issues plus the annual review) right here.

Summer activity will be vital for Hammers

The Rolling Stones at The London Stadium

How Manuel Pellegrini’s West Ham Will Line Up Against Burnley

How Manuel Pellegrini’s West Ham will line up for Crystal Palace...