As first seen on our network website which covers players, matches and more involving football – totalfootballanalysis.com.

Saturday is knocking on the door and it’s the day Samir Nasri might meet his ex-club Arsenal, making his first Premier League appearance since 2016. The Frenchman joined West Ham and made his debut in the win over Birmingham in the FA Cup.

Manuel Pellegrini’s side is performing quite solidly at the moment as the new manager has already implemented the ‘big club’ mentality among the players:

“I insist on the big team mentality because we are in a big club with 60,000 people behind us and we want to improve.”

Both teams look like they have the needed striking force but what could turn out to be their downfall is their defensive struggles.

They have only kept three Premier League clean sheets each all season and it’s expected that this stat will stay the same. It seems like the Gunners have a bit of an advantage as some of their key defenders as Hector Bellerin, Shkodran Mustafi and Nacho Monreal have returned from injuries. This would definitely make Unai Emery’s life easier as he won’t have to bother about his starting XI that much.

Having this in mind that there are also rumours about West Ham’s main man Marko Arnautovic might not play which would be a major problem for the hosts. The Austrian is a doubt amid claims over his transfer to China. But this could give Nasri a great chance.

It doesn’t mean it’s going to be an easy one for Arsenal, as the Hammers are able to exploit their weaknesses and get the three points. It looks like Emery is aware of that as he mentioned it before the game:

“I think West Ham are improving and they also have good individual players with quality. Usually (Manuel Pellegrini has) very offensive teams. They play matches with a balance tactically but above all with technical, offensive players.”

In fact, the Spaniard’s first victory in charge at Arsenal was against West Ham in Augist.

But what could both teams expect from each other and how could they take advantage of the opponent’s mistakes?

How Arsenal can win against the Hammers

Pellegrini has the needed squad depth and it is difficult to predict his next starting XI. He might go out in a 4-4-2 formation trying to apply a high press through the full-backs, Michail Antonio and Aaron Creswell. This could work as they try to attack Arsenal through the wide areas and provide crosses into the box. But it could also be tricky as the Gunners’ strengths lie in their counter-attacks and with Antonio going forward, the team would leave some free spaces. And no matter whether Emery is going to put Iwobi or Aubameyang on the left wing it would definitely be a problematic area for West Ham.

The Hammers might experience problems stopping the fast passing combinations as the central-backs, Issa Diop and Angelo Ogbonna, often fail to react quickly in these situations. The runs behind the defensive line that are usually Aubameyang’s specialities. Whilst the full-backs have to be careful with their defensive transition as Iwobi and Ramsey (for example) are going to give them hard time on the flanks with their through ball abilities. 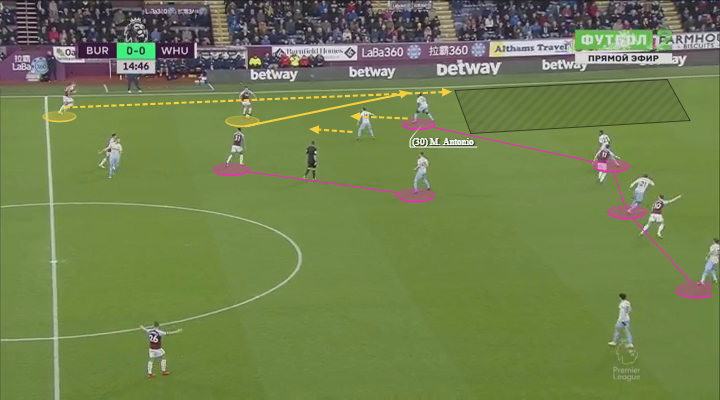 In a situation like this (against Burnley), when Antonio didn’t drop back enough during a defensive transition. It would be easy for the full-back to make a run on the flank and receive the ball in the uncovered area.

Also, having Lucas Torreira and Granit Xhaka would be crucial for Arsenal stopping West Ham from advancing centrally. If the midfield duo manages to slow down the Hammers’ build-up, they would be able to easily win the ball back and attack.

There’s a possibility of Arsenal going out with a 3-4-2-1 formation, using Bellerin and Kolasinac/Monreal as wing-backs. This might actually turn to be successful as the weakest area (where Michail Antonio is positioned) would be а subject of an enormous press. This way, the left wing-back would make runs on the flank and let’s say Iwobi would cut inside. He could get the defenders marking him, which would open space for Aubameyang. Or he could simply use his dribbling abilities and try to attack on his own.

Using Aubameyang and Lacazette up front with Ozil behind them could also work out. With the German positioning between the lines, helping with the build-up and distributing the ball further.

On the other side, the full-backs Antonio and Creswell would be very helpful up the pitch. They’re usually West Ham’s most active players and if the rest of the team is following their actions, they could create a lot of chances. The Hammers should focus on their link-up-play and exploit the spaces created by the Arsenal’s back line during defensive transitions. Using Arsenal’s weapon as their weakness and making short combinations of passes could give West Ham an advantage as their opponents’ defenders often lack strong decision-making.

In the picture below, you could see Antonio’s and Creswell’s movement and passes. They would go up front and help with the build-up.

In the next picture, you could see the movement and the passes of Snodgrass and Anderson. If the midfielders use the full-backs’ support and cut inside more often in pursuit of these fast combinations, they might create some spaces and take advantage of them.

Surely, both managers would make sure they analyse their opponents’ game and tactics strictly. Despite being five places apart in the table, there is no clear favourite in this game. I expect it to be a game of outwitting. It is going to be a matter of who is going to take advantage of the created opportunities.

Cresswell Misses Out On England Call As Other International Hammers Make...

A much-needed discussion of the lifeless West Ham And Man United...